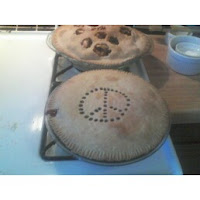 I consider myself something of a pie prodigy. My grandma taught me when I was a wee sprout that the best pie crust is made from ice-cold ingredients -- and she did it without a Cuisinart, using a pastry-cutter like a Barbarian.

The first time someone sees one of my pies, if it's a two-crust pie, they always smile at the way I vent my crust, and where the idea came from is actually a pretty cool story.
My middle kid is a Pastry Chef. A real one. She makes her living doing really elaborate and beautiful things. But before she was a professional chef, she was a curious kid who liked to spend time in the kitchen with me. I used the fact that she liked to cook and her siblings and father had to eat as the antidote to middle-kid-itis.
One cold, grey day when she was eight and March was coming in like a lion, we were baking pies and she asked me why I made cuts in the top crust before I put it in the oven. I explained that the fruit had a high water content and that it would turn into steam in the hot oven, and that if it wasn't vented, the filling would be watery, the bottom crust would be soggy and the top crust would be tough. She scrunched up her face and agreed that pie wouldn't be anyone's favorite dessert, let alone practically everyone's, if the top crust wasn't vented. Then she added "but it's still boring." 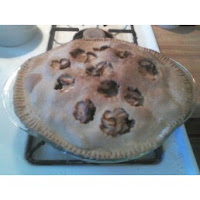 That's when the lightbulb came on. I knew where two teeny-tiny cookie cutters were -- they were in my kitchen "junk drawer." A couple of weeks before, she had taken the cookies for the Valentine's day party, and we had made a flying trip to the closest big box store for a heart-shaped cookie cutter when it was discovered five minutes before we rolled out the dough that ours had been...for want of a better word...smooshed. The only ones left in the store on February 13 was a card with four of them nested together. We had tossed the two smallest ones in the junk drawer, thinking they may have a future use with playdough, but they had no future as cookie cutters.
I took them out of the drawer and told Chev "I have an idea..."
When we rolled out the top crust for our second pie, I gave her the two little hearts and lightly drew a circle in the flour on the top of the dough with my finger and said "use these and cut five or six hearts out inside the circle." She lit up like the proverbial Christmas tree and thought about where she wanted to put each and every heart.
We gave the first pie out of the oven to Lucy and Martin next door, and after dinner, she took great delight in bringing her pie to the table and showing it to her dad, who displayed the appropriate level of excitement at her brilliant idea.
And from that day forward, we never just cut a boring old slit in a pie crust ever again.
Perfect Pie Crust

Put all the dry ingredients in the food processor and pulse to blend thoroughly. Chop up the frozen butter and put it in the bowl of the processor and cut the butter into the cold flour. Remove the lid, make a well in the flour and spoon in five tablespoons cold club soda and the tablespoon of vinegar into the well. Pulse to mix then turn on high for a few seconds. If the dough starts to come together in a ball, it's good. If not, add more club soda, a tablespoon at a time, until it does. Once the dough forms a ball, turn it out onto a floured board, work briefly and form a ball.
This recipe makes enough crust for one two-crust pie or two one-crust pies. If making two one-crust pies, divide the dough in half, work into two equal size balls, flatten to discs, wrap in plastic wrap, and chill for at least an hour, two is better and overnight is best. When I am making a two-crust pie, I don't divide the dough in half. Instead I make about a 2/5 - 3/5 split.
Roll it out about 3/8" thick, turn into a glass pie dish and form it, making sure to work out any bubbles. For a one-crust pie, press the edge with a fork, trim the excess, prick the bottom with a fork, fill, cover the edges of the pie with foil and bake until the filling is done and the crust is golden brown.
For a lattice pie, reduce the amount of the ingredients as follows:
For a single crust:
Posted by Blue Girl, Red State at 8:46 AM 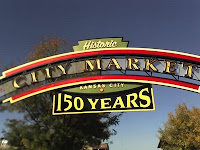 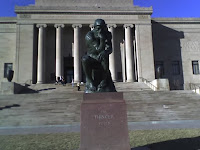